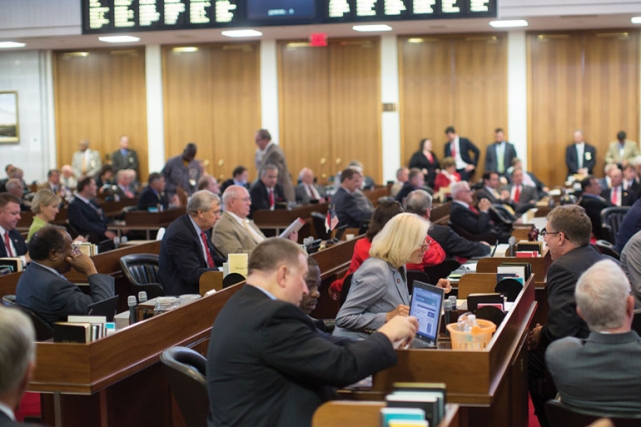 What’s the difference between Greg Gianforte and Raleigh, North Carolina? About 2000 geographical miles.  Otherwise, and after what the North Carolina Legislature and Governor did this week, they are one in the same.

Earlier this week the North Carolina Legislative body ramrodded legislation through to Governor Pat McCrory’s desk for signature in a mere twelve hours. Normally common folks like us might applaud this kind of efficiency from a group of lawmakers and even encourage Congress to take note.  Unfortunately in this case the purposeful speed was intended to move quickly before public ire could be brought upon the North Carolina house of the people.  In essence, the law prohibits local governments from extending basic civil rights protections to gay and transgender people.  According to McCrory the law was needed to prevent a man from using a woman’s bathroom, shower or locker room as may be granted by a local ordinance.  After all, it is truly government’s job to “…stop the breach of basic privacy and etiquette.”  Never mind that this law is probably unconstitutional.

The upshot is that multiple organizations and large businesses are speaking out against this fast tracked legislation. The NBA is signaling that it may move the 2017 All-Star Game out of Charlotte. And the NCAA, which is scheduled to hold a tournament in Charlotte in 2017 will ‘monitor’ the situation.  American Airlines issued a statement that such laws discriminate and go against their belief of equality and are bad for economies of states.

Travel back those 2000 miles and to the year 2014. The City of Bozeman, Montana was considering a non-discrimination ordinance in May of that year.  And who came out as the most notable opponent?  Current gubernatorial candidate Greg Gianforte.  In a May 12, 2014 Bozeman Daily Chronicle article Gianforte’s communication via email with the City Council expressing his concerns is cited and contained in its online version.  Gianforte is concerned that ‘Homosexual advocates try to argue that businesses are leery of locating in towns that aren’t friendly to homosexuals.  I believe the opposite is truer.’  Gianforte also believes the earth is only 6000 years old, that man and dinosaurs lived in harmony and

that a biblical flood didn’t allow Noah to consider retirement.  He does put his money where is theological mouth is as the largest funder of the Montana Family Foundation (which Susan Gianforte chairs) and is linked to funding groups who praise attacks on homosexuals.  In his ever evasive style, Gianforte refuses to answer when asked his position on non-discrimination ordinances.

As a religious man, surely Gianforte is a fan of Jesus Christ. Now how would JC look at all this?  JC was a small businessman for a while when he worked as a carpenter.  Let’s say JC gets a call to build a bathroom and arrives at the worksite.  He knocks on the door, the customer answers and is transgender.  Does JC take two steps back and say “No can do!  You pose a threat to small businesses, privacy and etiquette.”?  Probably not.  JC, from all accounts was a kind person.  JC likely builds the bathroom, shares some bread and wine and moves on to the next job with the expectation that his kindness and humanity are spread to others by his last customer, transgender or not.

Montana is not North Carolina, nor should it ever become so.

Maybe all men got one big soul ever’body’s a part of.

VOTER BEWARE of this tweet from Greg Gianforte!    Why?  Because it’s corporate pandering of the worst kind and, quite frankly, a serious threat to the Montana that we all treasure.

The average Montana voter probably isn’t aware that the Board of Land Commissioners, more commonly referred to as “The Land Board,” is comprised of Montana’s top elected officials   or that Montana even has a land board.  The Land Board is ancillary to their official duties and requires no specific requirements other than being popularly elected but they are required to make informed decisions on land use, including: grazing and farm leases, timber harvests, leases for oil, gas and mining operations, easements for powerlines, roads and driveways, recreational use fees, cabin lease fees and land sales and exchanges.   They oversee the use of some 5.2 million acres of land that was passed on to the state by that big bad federal government in 1889 upon statehood.  By an act of Congress, any revenue generated by the leasing of this land is used to support public education.

Now look back at that tweeted picture of ‘the new state land board (come 2017)…’ and take into consideration who they are and what they stand for.  Gianforte, Rosendale, Fox, Arntzen and Stapleton.  Two are out of state millionaires who have spent less than 20 years in Montana (one of whom apparently does more hunting of drones than birds); one is a born and raised Montanan; the other two are termed out legislators with dismal voting records who appear to be looking for a new place to land.   What they do represent is a group tied in with controversial land grabs by private entities and citizens across the USA.

Of course they all believe they can better manage not only the state lands under the care of the land board but what the hell, let’s take all that federal land too!   And while we’re at it, how about selling a few million acres here and there.  Locking up the king’s forest won’t be a problem since there’s a few thousand acres left for the common folk to use if they can afford a day off.

The agenda is not one of sustainable land use through careful approaches to resource extraction to minimize long term damage while maximizing financial gains.  The agenda is not one of sustainable jobs for workers and in turn generations of work for generations of Montanans; their goal is no different than that of the Copper Kings, lumber barons, or corporate agriculture; extract the treasures of Montana and turn it into a wasteland in the interest of corporate greed.  Those who toil on the land will not be left with a rocking chair on the porch from which to greet their grandchildren.  Instead both the land and the workers will be exploited and left with nothing in the end: no land to hunt, fish, camp and hike on let alone provide a decent paying job.

A picture is worth 1000 words; in this case it’s worth five:  if they win, Montanans lose.