It has to be impossible for Greg Gianforte to make this kind of Freudian slip again during his now spirally campaign, but we can all hope he will for the sake of entertainment.  During an interview with Montana Public Radio at his latest campaign stunt Gianforte was asked what kind of gun he was using and responded ‘It’s a Marcus Daly over under’.  In fact, Gianforte was shooting a Charles Daly over and under, his trusty all around gun.  It’s hard to tell which model he’s trying to impress the average Montanan with, however, he may have wanted to opt for a different brand.  Charles Daly shotguns are made in Turkey and probably have the finger prints of Muslims all over them.  But that and the fact that it’s imported aren’t really the point. 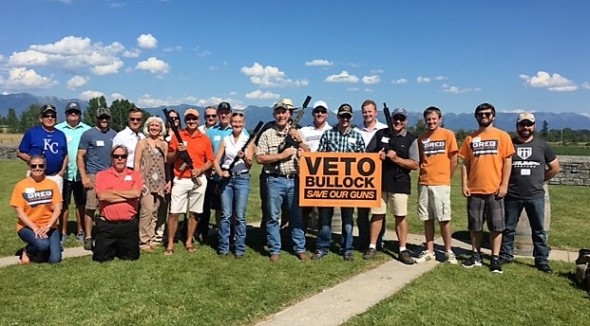 Susan, be sure to thank the guy in the KC shirt for holding my beer so I wouldn’t drop my spiffy gun.

The idiocy here is the continued grasping of the vetoes by Governor Bullock relating to ‘pro gun’ legislation in the past two legislative sessions.  While it would be important to understand the specifics of each bill it may be more valuable to understand just how some legislation passes ‘along party lines’.  Particularly when there is a veto pen (or brand) waiting at the legislative factory doors when such garbage law is dumped.  Seasoned and sensible legislators understand that they have to maintain some level of standing within their party to move their own bills when the time comes. Sticking to a party line on bills that are destined for the big V is a safe and logical way to do just that.  To believe that all Republican legislators who voted in favor of bizarre ‘gun bills’ were actually in favor of such bills is pure ignorance of what actually takes place during those 90 days every other year.

Gianforte have been trotting out as Bullock is labeled as anti Second Amendment.  HB 240 would have prohibited the Board of Regents and the Montana University System from ‘…regulating or restricting the possession of firearms on university property…’.  Fortunately, and to date, Montana has not had to mourn the tragedy of a campus shooting and will hopefully continue to avoid the national spotlight thanks to Governor Bullock refusing to sign such a moronic bill. College freshman should leave their firearms back home and stick to keg stands, beer bongs and visits to the ER for alcohol poisoning.  Perhaps there is a ‘liberal’ open carry policy at Gianforte’s Petra Acedemy.

Sports Association and enjoys his endorsement by the National Rifle Association.  A rhetorical question here, how is an ‘A’ rating from the NRA possible without having done anything but engage in his usual promise of anything they ask?   Sounds a bit like an NRA participation medal presented by Marbut himself.

To paraphrase:  It’s been four years of Steve Bullock and all I got was to keep my guns and health care.’